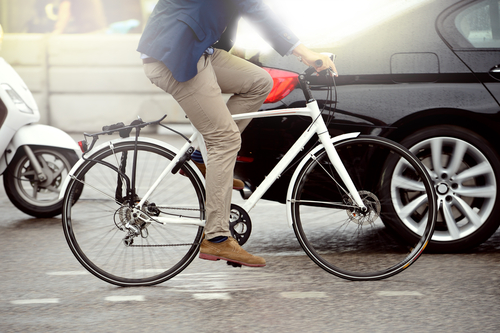 As more and more people take advantage of the benefits of cycling and walking in Georgia, it is important that motorists, motorcycle riders, cyclists and pedestrians learn to share Georgia roadways safely, working together to reduce the risk of serious accidents.

Unfortunately, bicycles tend to be overlooked by drivers of passenger cars and trucks due to their small profile, especially if the driver is distracted, speeding, or fails to acknowledge traffic signals.

In a collision between a passenger car or truck and a bicycle, it’s not hard to guess who would suffer the most serious injuries. Unfortunately injuries caused by cycling accidents in Georgia can result in severe physical pain and a number of additional hardships, including costly medical bills and lost wages from missed days at work. If you have suffered injuries caused by a bicycle accident in Alanta, contact our experienced bicycle accident attorneys at Rechtman & Spevak today.

Bicycle Accidents in Georgia and the U.S.

Cycling accidents cause serious injuries and tragic loss of life in Georgia and across the United States every year. Believe it or not, Georgia represents one of the most dangerous states for cycling in the country, which is an important consideration for those who have taken to cycling to reduce gas costs and adverse effects on the environment. In fact, Georgia ranks number eight in the country for the number of bicycle accident fatalities, and accounts for a number of bicycle accident injuries as well. According to the National Highway Safety Administration, 630 cyclists were killed in bicycle accidents in the United States in 2009, and 51,000 cyclists were injured that same year.

Many motorists see marked bicycle lanes as an opportunity to pass slower cars and have the road to themselves, so to speak. Unfortunately, this misuse of a lane specifically designated for cyclists puts cyclists at risk of serious accidents caused by negligent drivers. Many bicycle accidents in Georgia and in the U.S. occur when a vehicle uses the bicycle lane, backs out of a driveway into a bicycle lane, or when a driver is operating a motor vehicle while texting, talking on the phone, changing the radio station or otherwise driving distracted. Drivers are continually faced with more distractions which have lead to more deadly consequences. Due to the prevalence of bicycle accidents in Georgia, motorists are required to stay at least three feet behind cyclists on the road, a law enacted to reduce the incidence of Georgia bicycle accidents.

About 540,000 cyclists visit emergency rooms throughout the United States with injuries every year. Of those cyclists, approximately 67,000 suffer from head injuries and 27,000 have injuries serious enough to require hospitalization. Some of the most common injuries resulting from bicycle accidents in Atlanta include:

Damages for Bicycle Accidents in Atlanta

Many injuries resulting from cycling accidents in Atlanta have the potential to cause long-term physical suffering, as well as costly medical bills, lost income due to missed time at work, and other life-altering consequences. Fortunately, bicycle accident victims may have grounds to file a personal injury lawsuit against the person found to be at-fault for their injuries, in order to pursue financial compensation for damages associated with their injuries, including pain and suffering, current and future wages, medical expenses, future medical care and decreased quality of life.

Cyclists have the same rights on Georgia roadways as drivers of passenger cars, truck drivers, pedestrians and motorcycle riders. When drivers violate this right, either through lack of respect, carelessness or inattentiveness, serious bicycle accidents can result. If you or a loved one has suffered injuries caused by a cycling accident in Atlanta, Marietta, or in another part of Georgia, contact our qualified personal injury lawyers at Rechtman & Spevak to explore your compensation options. Having an experienced Bicycle Accidents Attorney on your side when filing a personal injury lawsuit can significantly improve your chances of receiving a fair and timely settlement from the insurance company or a favorable outcome in court.