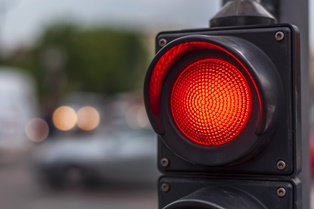 “Red means stop” is an idea that's nearly universal. Unfortunately, when drivers fail to uphold this basic rule of the road, serious or fatal car accidents often occur. After a crash, you might end up severely injured, temporarily or permanently unable to work, and inundated with an unexpected influx of medical and other related expenses.

But, depending on the circumstances of the accident, you may not have to shoulder these burdens alone.

If you were hurt—or you lost a loved one—in a catastrophic Georgia car crash caused by a driver who ran a red light, you may be entitled to take legal action to seek compensation for damages. Our skilled personal injury attorneys can investigate your case, help you understand your legal rights and options, and assist in fighting for the financial recovery you deserve. Here's what you should know before filing a civil car accident lawsuit.

Accidents attributed to running red lights are a growing problem in the United States, according to a 2019 data analysis conducted by the AAA Foundation for Traffic Safety. Not only did the analysis show that fatal red light running accidents are the highest they've been since 2008, but it also marked a disturbing 28-percent increase in these types of crash fatalities since 2012.

That's not all: Despite 85 percent of drivers surveyed agreeing that running red lights poses a serious danger to everyone on the road, nearly one-third of participants admitted to having done so within the past 30 days. Consider these other concerning facts and numbers:

What makes motorists run red lights when they're likely aware of the risks? Research shows these crashes can have a number of causes, including:

Victims can seek damages for both economic and non-economic losses sustained as a result of the red light running crash. Economic damages compensate you for quantifiable financial losses, such as all related medical expenses, property damage repair or replacement, lost wages, or loss of earning capacity. You can also be compensated for intangible losses of subjective value, like physical pain and suffering, mental and emotional anguish, scarring or disfigurement, reduced quality of life, and other damages.

Not sure which damages may apply to your Georgia car accident case? Our attorneys can review your case and provide an estimate of its value.

Was someone you love killed in an accident caused by a negligent driver who ran a red light? If you're a close family member of the deceased, you may be entitled to file a wrongful death claim to seek compensation for losses incurred as a result of the untimely death. These losses can include wages and benefits the victim would have earned, as well as the loss of their love, companionship, care, or guidance.

Additionally, a second type of claim can be brought on behalf of the estate to pursue damages for the victim's related medical expenses, funeral and burial fees, and the pain and suffering they endured prior to death.

Our skilled attorneys can help resolve your personal injury or wrongful death case caused by red light running. Contact us today to schedule an appointment for a free case consultation.