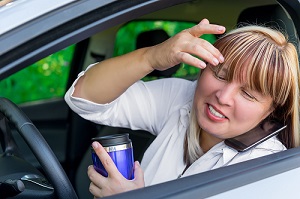 According to government statistics, over 3,000 people were killed and another 431,000 injured last year in auto accidents involving a distracted driver. An August 2015 report from the American Automobile Association (AAA) noted a marked increase in traffic fatalities in Georgia last year, with more than 700 roadway deaths through the first eight months of the year. AAA stated that 79 percent of those deaths were caused by a distracted driver.

When drivers are not focused on the road, there are serious and often deadly consequences. Safety advocacy groups and technology companies alike are seeking to reduce those dangers, but even so, it is a growing and persistent problem.

What Is Distracted Driving?

The federal government’s website on the topic, distraction.gov, defines distracted driving as “any activity that could divert a person's attention away from the primary task of driving.” There are many sources of distraction. Some of the most common include:

All these activities, and others, put people at risk on the road by taking the driver’s attention away from the task of driving.

Types of Distraction That Lead to Accidents

The CDC notes that texting while driving is especially dangerous because it combines all three modes. A Federal Motor Carrier Safety Administration (FMCSA) study found that it takes an average of five seconds to read a text message in the car. That’s five seconds in which a driver is not looking at the road, and in those five seconds a vehicle traveling 55 mph can cover the length of a football field.

Georgia, like many other states, has enacted laws that ban texting while driving for all drivers. While some states have also banned the use of any hand-held device while driving, Georgia law does still allow talking on a hand-held cellphone for drivers over the age of 18.

In efforts to follow the law and increase safety, many consumers have started using hands-free technology in the car. Voice control systems are very popular, which in theory simply allow a person to speak directions to the car or a phone. They can be used to text, change the radio stations, find directions, and more. However, a recent study from the University of Utah found that this technology still contributes to distracted driving, and, in some cases, even increases the risks. The study found:

If You’re Involved in a Distracted Driving Accident

Despite the recent push to inform the public and the high number of accidents involving distracted driving, experts say many people still simply don’t realize the danger associated with engaging in distracting behaviors behind the wheel.

Additionally, law enforcement officials acknowledge it can be difficult to prove that a driver was distracted at the time of an accident. To pursue charges related to texting and driving, one would have to see the distracted driver with phone in hand sending a message.

If you are involved in an accident with a distracted driver, it is important to gather as much evidence as possible. Try to obtain:

If you or someone you love has suffered injuries in an accident with a distracted driver, you may be eligible to make a claim. Take a moment to fill our online contact form and a member of the experienced Rechtman & Spevak legal team will respond promptly. Let us help you learn more about your rights today.