Keeping Georgia’s Children Safe on the Road: The Latest in Child Restraint Laws 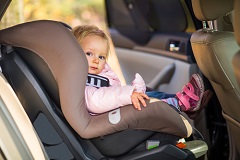 Both the attitudes and rules concerning how infants and children ride in vehicles have changed dramatically over the years. Gone are the days of unrestrained kids laying across the back of a station wagon or seeing how many children fit in one minivan. As safety research and new technology advanced, car seats and booster seats became more common. Seat belt use among children grew.

The Centers for Disease Control and Prevention (CDC) estimates that car seat use reduces the risk of death in an accident for infants by 71 percent and by 54 percent for toddlers. Despite these statistics and the growing use of child restraints, the CDC reports that still more than 600,000 children ride in a vehicle without a child seat or booster seat at least some of the time over a one-year period. In 2013, more than 700 children died and more 172,000 were injured in traffic accidents.

Today, experts strongly recommend children be secured by appropriate restraints, and every state has laws concerning how infants and children must be restrained during vehicle travel.

Georgia law has required the use of car seats, booster seats, and seat belts for some time. However, the law was changed slightly in 2011 and made stricter. Senate Bill 88, known as Madison’s Law, was approved in July of that year and named in honor of a young girl whose life was saved by a booster seat. Madison survived a horrific crash in which her side of her family’s minivan was sheared off when it was hit by an SUV. Emergency personnel on the scene credited the safety seat with protecting the girl.

Georgia law states that every child under the age of eight must “be properly restrained in an appropriate child passenger safety seat or booster seat.” In addition, the seat must:

Children who are younger than eight years old but are taller than 57 inches may be exempt from this law and can travel using only the car seat belt. Additionally, exemptions exist for those with written notice from a healthcare provider that a medical condition prevents the child from being properly restrained. In these cases, parents should keep the medical waiver with them at all times.

These laws apply to all drivers in vehicles designed to transport ten passengers or fewer. Children do not need to be restrained in this manner when traveling by taxi or public transportation.

Though there are no mandates regarding these additional practices, the state does offer recommendations for children as they grow. These suggestions address the best practices for kids based on age:

Consequences for Failure to Restrain Children in Georgia

If drivers fail to properly restrain the children in their care, they may be subject to legal consequences. The state of Georgia has what are known as primary seat belt laws. This means that a law enforcement officer can stop the vehicle and issue citations simply for observing a lack of compliance with car restraint laws. In some other states, tickets for lack of seat belt use can only be issued if the driver is stopped for another violation.

The first offense for failing to properly restrain a child can result in a ticket and a $50 fine. Subsequent offenses can cost $100 and two points on the driver’s license. A citation can be issued for each child improperly restrained.

Child car seats and booster seats can save lives and are the law in the state of Georgia. To learn more about traffic accidents and Georgia law, chat live with a member of the experienced legal team at Rechtman & Spevak.