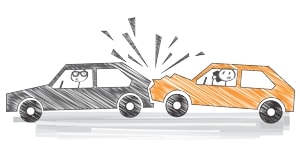 Rear-end collisions are some of the most common on the roadways today. According to the National Transportation Safety Board (NTSB), rear-end crashes accounted for almost half of all two-vehicle crashes in 2012.

Though many people think of a rear-end crash as a minor traffic accident, there have been many instances in which this type of accident has had devastating results. One NTSB report investigated nine rear-end crashes which together resulted in 28 fatalities and 90 injuries. That’s just one reason why it’s important to learn more about these potentially dangerous crashes.

Why Are Rear-End Collisions So Common?

There are many reasons why one driver fails to slow or stop appropriately and crashes into the car in front of them. Many common driving issues result in rear-end collisions, including:

There are a myriad of injuries one can sustain in a rear-end crash. The most common injuries include…

Many people assume that the trailing car which crashes into the leading car is always at fault in a rear-end crash. It is true that the trailing vehicle nearly always holds some degree of fault. All drivers are responsible for following traffic at a safe distance. Drivers often have to slow or stop suddenly in response to traffic or other road hazards, such as objects falling or rolling onto the roadway.

Georgia is a comparative fault state, which requires victims to demonstrate how the person responsible for the accident is to blame.  A victim can receive some amount of compensation as long as he is less than 50 percent at fault for the accident.

If you or someone you love suffered injuries in a rear-end collision, you may be entitled to compensation. Contact the Atlanta car accident lawyers at Rechtman & Spevak today to learn more about your rights in Georgia and what kind of award you may be able to obtain.