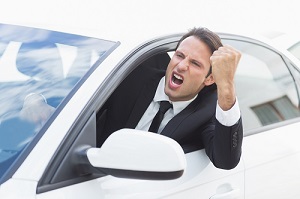 On the road, there is no shortage of minor aggravations and inconveniences. Traffic jams, road construction, poor weather, boredom, and the behavior of other drivers can all contribute to a feeling of frustration behind the wheel. Typically, drivers are able to overcome these irritations and reach their destinations safely. In some cases, however, these feelings of impatience and frustration cause drivers to engage in aggressive driving. According to the AAA Foundation For Traffic Safety, aggressive driving is responsible for more than half of all traffic-related deaths, and 80 percent of drivers believe that aggressive driving is a “serious” or “extremely serious” problem on our roadways.

What Is Aggressive Driving?

The National Highway Traffic Safety Administration (NHTSA) defines aggressive driving as engaging in “a combination of moving traffic offenses so as to endanger other persons or property.” Aggressive driving is slightly different than some other common road issues, though they are often used interchangeably. Those include:

Recognizing an Aggressive Driver on the Road

Spotting an aggressive driver behind the wheel can help other drivers take action to avoid accidents and injuries. Some key signs of aggressive driving include:

Though some of these behaviors are common, they are all indicators of aggressive driving. Additionally, AAA notes that one aggressive act from one driver may easily and quickly trigger escalating responses from other drivers.

Researchers from the NHTSA state that many factors contribute to aggressive driving, including lateness, traffic delays, learned behavior, and the anonymity provided by a vehicle.

If You’ve Been Hurt by an Aggressive Driver in Georgia

Aggressive driving can result in many types of auto accidents, including rear end crashes and loss of control. If you’ve been involved in an accident with an aggressive driver, it is important to retain as much evidence as possible. File a police report, take photos of any and all damage, and collect contact information from witnesses if possible.

When others fail to respect fellow drivers and the rules of the road, they should be held accountable. If you or someone you love has suffered injuries in accident due to an aggressive driver, the experienced personal injury lawyers at Rechtman & Spevak may be able to help. Call our Atlanta office today to schedule a free, no-obligation consultation.